NYSC: BAUCHI COMMITTED TO SUCCESS OF NYSC - GOV, About NYSC

25 April
The Bauchi State Government has expressed commitment to assisting the National Youth Service Corps to achieve its mandate. 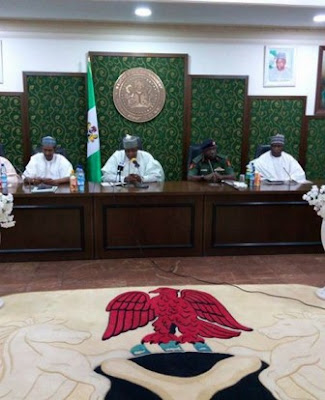 Governor Mohammed Abubakar gave the assurance today when he played host to the Director-General, Brigadier General Sulaiman Kazaure, at the Government House, Bauchi.

Speaking against the backdrop of the security situation in the north-east of the country, he averred that Bauchi State had always been spared of the activities of insurgents.

While acknowledging the successes recorded against Boko Haram by the Nigerian Armed Forces, Abubakar said the Bauchi State Government had been taking measures to ensure the safety of Corps members posted to the state.

"We have to go the extra mile to make the Corps members feel welcome and protected," he said.

The Governor also said steps had been taken to ensure that the NYSC Orientation Course takes place in a peaceful environment.

He relived his experience as a Corps member in Rivers State; stressing that the friendship he had built since then still remains.

Earlier, the Director-General, Brigadier General Sulaiman Kazaure, said the Scheme remained appreciative of the state Government’s support, especially through perimeter fencing, construction and renovation of hostels, as well as construction of a modern kitchen - all at the NYSC Orientation camp in Wailo.

Kazaure also thanked the Governor for according priority to the welfare of Corps members.

About the NYSC
The National Youth Service Corps (NYSC) is an organization set up by the Nigerian government to involve the country's graduates in the development of the country. There is no military conscription in Nigeria, but since 1973 graduates of universities and later polytechnics have been required to take part in the National Youth Service Corps program for one year.[1] This is known as national service year. Ahmadu Ali served as the first Director-General of the NYSC until 1975.[2] The incumbent Director-General is Brig. Gen. Sule Zakari Kazaure.

Operation
"Corp" members are posted to cities far from their city of origin. They are expected to mix with people of other tribes, social and family backgrounds, to learn the culture of the indigenes in the place they are posted to. This action is aimed at bringing about unity in the country and to help youths appreciate other ethnic groups. There is an "orientation" period of approximately three weeks spent in a military controlled boot "camp" away from family and friends. There is also a "passing out ceremony" at the end of the year and primary assignment followed by one month of vacation.

Objectives of the scheme
The objectives of the National Youth Service Corps Scheme are clearly spelt out in Decree No.51 of 16th June 1993 as follows To inculcate discipline in Nigerian youths by instilling in them a tradition of industry at work, and of patriotic and loyal service to Nigeria in any situation they may find themselves. To raise the moral tone of the Nigerian youths by giving them the opportunity to learn about higher ideals of national achievement, social and cultural improvement To develop in the Nigerian youths the attitudes of mind, acquired through shared experience and suitable training. which will make them more amenable to mobilisation in the national interest To enable Nigerian youths acquire the spirit of self reliance by encouraging them to develop skills for self employment To contribute to the accelerated growth of the national economy To develop common ties among the Nigerian youths and promote national unity and integration To remove prejudices, eliminate ignorance and confirm at first hand the many similarities among Nigerians of all ethnic groups To develop a sense of corporate existence and common destiny of the people of Nigeria. The equitable distribution of members of the service corps and the effective utilisation of their skills in area of national needs That as far as possible, youths are assigned to jobs in States other than their States of origin That such group of youths assigned to work together is as representative of Nigeria as far as possible That the Nigerian youths are exposed to the modes of living of the people in different parts of Nigeria That the Nigerian youths are encouraged to eschew religious intolerance by accommodating religious differences That members of the service corps are encouraged to seek at the end of their one year national service, career employment all over Nigeria, thus promoting the free movement of labour That employers are induced partly through their experience with members of the service corps to employ more readily and on a permanent basis, qualified Nigerians, irrespective of their States of origin

As prospective corps members prepare for NYSC orientation camp starting soon, what do they need to know that no one else will tell them?

We have compiled things you need to know as you prepare for the three weeks orientation camp. 1. Get to camp early so you can get the best rooms and settle in. Get there as early as possible on that day, before all the bests rooms are chosen. You don't want to spend 3 weeks in a room you don't like.

2. Choose your room with care, check for wall sockets, fans and good beds. Also pick a room that is not close to the toilets. Wall sockets might help with charging, working ceiling fans will keep away the likely heat.

3. In your room, choose the top bunk, so you are closer to the ceiling fan or a bunk bed close to the window to help you survive the heat.

4. To avoid losing valuables, buy a padlock for your bag and get a waist pouch to keep your keys, phones and money.

5. If you plan to give your clothes to the dry cleaners, then you should get a permanent marker and put your code number on all your items of clothing, so they don't get mixed up.

6. Set a daily alarm, so you can wake a little earlier and you get to have a little time to prepare before the drill instructors come.

7. It is important that you make friends, so do not keep to yourself, some make valuable friendships in camp. Some even meet spouses.

8. Visit the mosque in the morning for prayer, if you need few minutes of extra sleep.

9. It might be difficult at first, but try to enjoy the drills, they will keep you fit and in shape.

10. Do not be afraid to eat both camp and mammy food. Have a schedule, you will spend less and enjoy more.

11. If you want to be posted to a particular place for your year of service, get a request letter from your preferred place of PPA and give to your platoon leader on time while in camp.

12. You will be waking up early a lot of time, so catch up on sleep, any chance you get, you will leave the camp with better health.

13. It is not a do or die affair. You can easily leave the camp if your health is not good, just apply for 'exeat', ask your platoon leader how to go about it.

14. If you do not want to march for your platoon, you should join the Martial arts classes, they are quite fun and you will learn self-defense.

15. Make sure you fill the 'Book of life' while in camp. It is one of the most important things to do.