UNILORIN: Mosquitoes are our friends, stop killing them – Ande

06 June
Although the mosquito is undeniably one of the world's most despised insects that has long been blamed for spreading malaria that kills millions of people each year, a Professor of Entomology at the University of Ilorin, Adeolu Taiwo Ande, has said that killing mosquitoes is bad, because “they are 'friends' that “deserve to be properly managed”.

Prof. Ande made this submission last Thursday (June 1, 2017) while delivering the 169th Inaugural Lecture of the University, entitled “Consider the ways of 'Ants' and be Wise.”

The Entomologist, who described insects as the “most successful and influential group of organisms in the biosphere”, noted that humans have a lot to learn from them in order “to get wise.” 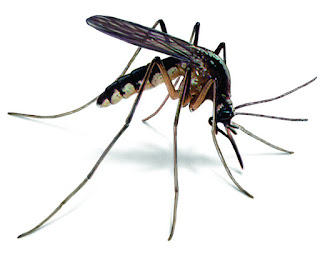 Dwelling extensively on three of such insects- Mọ̀nímọ̀ní (Cirinaforda), mosquitoes and the honey bees, the Inaugural Lecturer observed that “human life is beset with inevitable associations with insects that have over the years influenced human destiny positively and negatively”.

According to him, “negative influences, such as disease transmission, crop losses, food spoilage, economic losses and nuisance value caused by less than 5% of insect species have been exaggerated by man, while the more extensive positive influences of insects which include pollination of flowers, waste recycling, ecosystem sustenance activities, use as source of silk, shellac, cochineal, therapeutic agents, aesthetics, biological control agents and food source are however unappreciated and down-played”.

Prof. Ande opined that man “deliberately misconstrues mosquitoes' role and frequently describes them as causing the diseases they transmit: a case of calling a dog a bad name to nail it, when in the actual sense, the mosquitoes are equally sick but inadvertently and unwillingly convey pathogens that are the real causal agents of these diseases.”

According to the don, the female mosquito could be “described as an example of a true mother (Abiamo tooto)” who “is forced to undertake a 'suicide mission' in its bid to provide for its unborn children.” He explained that “adult female mosquitoes have exceptional value for child raising hence the level of commitment and risk they take on the mission that entails a decision between life and death.”

“The after effect of this commitment is a well thought-out plan that forestalls most of the factors may stand in the way of raising good children. I am sure most human females will not take comparable decision in the face of similar attendant risks. It is however certain that children born after well thought out and risky conditions are better posited for quality living than those produced carelessly.”

“For the human race to improve, our dear ladies must view child bearing as a serious business that requires fortified planning aimed at providing and ensuring quality living and survival of our offspring. This will drastically reduce the incidences of unwanted pregnancies, street children and will surely checkmate population explosion constructively” he said.

Prof. Ande explained that “mosquitoes have proved to us over the years that they are our friends and allies and whether we like them or not they will exist and continue to source blood from us”, adding that “unfortunately, our lack of understanding and intolerance has been largely responsible for the use of ungodly methods to handle them”.

According to him, the wise way out is to get more friendly with them and use ecologically compatible methods against them. “My advice is stop killing mosquitoes; they are friends and they deserve to be properly managed”, he added.

The Entomologist pointed out that the honey bees “sting as a last resort because it has a cost that is ultimate, i.e. the demise of the stinger; thus it is a suicidal mission but for a good purpose which is the survival or protection of the colony thereafter”.

Noting that “humans, having discovered the goodness of honey, have resorted to the use of smoke and fire (arson) to prosecute forceful harvest, hence committing an action comparable to an armed robbery exercise”, Prof. Ande stated that “this practice over the decades has affected the quality and quantity of honey available and the life system of the ecosystem adversely, as the bee's role in pollination has been heavily compromised.

The don suggested that to forestall these drawbacks, honey bee farming (Apiculture) should be encouraged”, “as it will improve honey quality and production, provide job opportunities, enhance bee presence in the ecosystem, enhance pollination, and improve crop production: all of which are highly desirable and required qualities for our ailing ecosystem.”

Blaming Zoologists for the relegation of the discipline in contemporary times, a situation which he said, had affected “the quality of students, young lecturers and the entire educational system of our nation”, the scholar called for the establishment of an insect museum in Unilorin “to curate insect species in the Middle Belt region of Nigeria.”

According to him, “As Africans and indeed Nigerian Biologists and Naturalists, it is an unpardonable disservice to be oblivious of the identity and record of our animals, only to fall back on our colonial masters 50 years after independence. At the very least and as a matter of urgency we need to establish a Nigerian museum that correctly identifies and stocks Nigerian insects. Biologists should also note that strange specimens should never be assumed to be new until after confirming with international museums.”

Prof. Ande called for the improvement of the Zoology curriculum to ensure better focus on organisms that feature prominently around us, as well as the promotion of practical classes that 'enable the demonstration of zoological techniques, diagrammatic expression which Zoology is renowned for…'

The don, who also commended the University management for establishing the Unilorin Zoo, however remarked that, “Zoologists are expected to be the foster 'parents' of the animals in the Zoo and should be familiar with their needs and their health status. Committing the Zoo to veterinary doctors is like a parent (Zoologist) yielding over his children to family doctor for their welfare.”