ACEONDO To Be Changed To Adeyemi Federal University of Education (AFUED)

26 July
The Adeyemi Federal University of Education, AFUED, which was sometimes put on hold in August 2015 after the public announcement by the immediate past President of Nigeria, Goodluck Jonathan, has today received a full sigh of hope for reversal of the status. 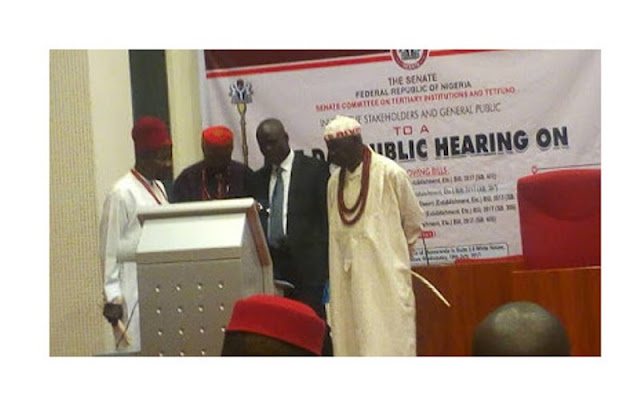 This hope came alive as the Adeyemi University bill and its establishment, named SB 399, was successfully passed unhindered at the Senate committee on Tertiary Institutions and TETFund.

In his own remark while declaring the public hearing opened, the Senate president, ably represented by the Deputy chief whip of the house, Senator Francis Alanumeta, a distinguished senator from Edo state, said that the bill, which came along side other bills in the same line, seeking establishments of Federal universities of Kano, Owerri and Zaria,  named SB 397, 398 &400 alongside the bill seeking the upgrading of FederalCollege of Agriculture Kabba to a University of Agriculture, is a bill that the Senate supports as the affected Colleges of Education already have existing facilities both human and materials for a successful take off such that the federal government will have less to spend in this time of economic recession.

Meanwhile, in his address of welcome, the chairman Senate committee on tertiary education, Senator Jubril Barau, assured the audience that all opinions on the matter for discussion will be heard, irrespective of the perspective. He further stated that the minority will always have their say while the majority will in turn have their way.

After the public hearing, it was indeed jubilation galore for the representatives of the four age long colleges of education whose respective bills on the upgrade to federal universities of education did not receive canter memorandum. It is therefore hoped that very soon, the Senate committee report will be ratified by the house and consequently sent to the president for executive approval and sign-in to law. It would be recalled that earlier in 2016, the respective bills have equally sailed through the processes in the green chamber.

Earlier, the presence of Senator Dino Melaye to the conference hall witnessed a loud ovation being one of the sponsors of the bills under consideration and also acknowledged as one the highly profiled senator of the federal republic of Nigeria with the highest number of sponsored bills. While addressing the August gathering, Melaye in his usual dynamic manner, pulled his weight behind the bill and dramatically affirmed that he would even go spiritual, beyond being political in seeing the successful signing of the proposed bill into law.

Leading the delegation of the College to the red chamber is the College Provost, Prof Olukoya Ogen, accompanied by the eminent Council chairman, Prof Nathaniel Ohazurike and Dr. Folorunso Balogun who equally lend their voices in support of the bill through their memorandum. Also present are the representatives of the paramount ruler of Ondo kingdom, the Lisa and Sasere of the kingdom, who both, through their paper presentation affirmed that the reversal of the Adeyemi University which was put on hold will certainly restore the joy of Ondo kingdom.