24 July
A student of the Ajayi Crowther University, Oyo, David Tobiloba Adeyemi, has won the Lagos Model United Nations 2017 Idea Fair. The event is a three-day International Relations simulation Organized by the Faculty of Law, University of Lagos, to provide an opportunity for participants to interact and use debates and other methods of communication to bring solution to African and World issues. 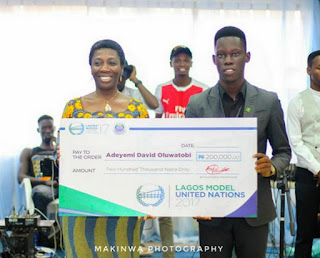 The theme for this year is Innovation, Diversity and Development for Global Sustainability.

At the event, David Adeyemi, who is a 300 level student of Micro Biology at Ajayi Crowther University, Oyo, applied for the Ideas Fair, which is a novel concept introduced as one of the events for the 2017 edition. His idea was considered the best and he was given the start-up capital of ₦200,000 (Two hundred thousand naira).

In addition to the display of diplomatic and oratory skills by the delegates during the conference, the Idea Fair seeks to engage the entrepreneurial, Problem-solving and creative minds of the delegates by requiring them to proffer solutions to issues of both national and international concern through pragmatic, sustainable and entrepreneurial projects from over 1200 youth delegates , with overwhelming potential to contribute to social change, development and sustainability in their respective localities.

It is based on how to  promote sustainable living among individuals in poor and disorientated communities by providing indirect mass employment, sustainable power supply, recycled irrigation water for farmers and bio fertilizers which are all twice cheaper than all their product competitors in the market, using Organic Waste Recycling.

After extensive screening at the preliminary stage by the judges, Project ENERGEM was shortlisted amongst the Top 10 final projects. David was  the only private university student shortlisted in the final round against 9 other University of Lagos [UNILAG] students.

After a seven-minute powerpoint presentation to the students and submission of  3 hard copies of his proposal to the judges, David was declared winner.
He was presented the startup capital grand price which is ₦200,000 (Two hundred thousand naira)  by the Dean of the Faculty of Law, University of Lagos courtesy of Oxfam International.

David says he intends to use the start-up capital to set up ENERGEM Mini Power hub in lagos, which will commence with providing people with easy access to power to  charge their phones and other electronic gadgets. He said the project will expand over time.

The Vice Chancellor of Ajayi Crowther university, Rt. Rev. Professor Dapo Asaju, has congratulated David  and expressed happiness that the Entrepreneurship training undertaken by students in the university was yielding fruits. He promised that the university will also reward David for doing it proud.