05 July
Tertiary Institutions workers are yet to get their salary for the month of June. The Accountant General of the Federation refuses to release the salary because most tertiary institutions of education fail to comply with e-Payment requirement. Every institution is required to send names of its workers and their wage profile for direct salary payment into individual salary account from CBN. 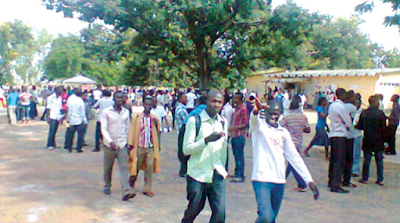 Why are the tertiary institutions declining to comply?
The e-payment will lead to many unpleasant consequencies against managements of the tertiary institutions. First, ghost workers will be exposed. Unapaid allowances will also be known to ordinary workers. Also underpayment of salary will come to an end. At the end of it all the workers will gain because underpayment and diverted allowances will come directly from the CBN into individual account. The Government will also gain since ghost workers money will be recorvered. This means in terms of gaining, the government and the workers are on the same side. In terms of losing the Management and the union leaders will lose what they cut and divert from wages and allowance and share. We know this to be so because in all the institutions where e-payment is effected, workers gained and management cried bitterly for loss of loots.

Now the battle line is drawn. The union leaders under the covert instigations of their respective managements are threatening to go on strike in the next two weeks. Unfurtunately the workers are kept in the dark about the true nature of the strike. Workers are being misinformed that if Government is allowed to start the e-payment (IPPS) many will lose their jobs and all will get less salary. These liers have gone to the extent of printing fake salary structure showing less money. This is to decieve the workers to give support to their conniving paid union leaders.

Workers must rise up against this planned strike. Workers must be aware that they will be the beneficiaries of this e-payment. If you know any worker where e-payment has already been implimented ask and hear about their benefit. It is called IPPS system.

It is time to say no to the union leaders who always fight only for their own interest.

Whatever the case, Government will not go back on cleaning the system for the good of all ecxept the corrupt administrators and union leaders. If workers allow this strike to go on, they should prepare for indefinite strike without salary. The administrators will eat what they stole, the union leaders will eat your union money, while the workers will turn into beggars as the industrial action goes on throught months. A lot of allowances have not been paid by the administrators , but the union leaders never call for a strike because they get their share. Why now when workers will get paid directly from CBN will the union go on strike?

For those who are observent, they might notice that appointment letters were given to many lucky people from the past five months to date in almost all tertiary institutions. It is part of the benefit of e-payment as the administrators are trying to replace ghost workers with real workers. In FCE Zaria alone I am aware of over two hundred ghost workers. In ABU Zaria, there is similar case where casual workers were included in regular payrol but were being paid pittance as casual workers. As you may notice, unusually many people were employed in ABU for the last five months. This is to cover up ghost space. The same thing is happening in other education and research related institutions. E-payment insisted on by the Accountant General has forced this corrupt and wicked people to employ people to cover ghost spaces. This is the first benefit. Workers will see the next benefit in the recorvery of their diverted allowances and cut salary if they resist the attempt to the fraudulent union leaders to on strike.

Now it is the time for workers to fight for their right to uncut salary and full salary. I believe the simple remedy is for the workers to dissolve any union EXCO that insist on going on strike or that goes on strike without their mandate. I have done my part of enlightening you, the rest is your choice.